The piano was fundamental to Igor Stravinsky’s modus operandi as a composer, not least when he was writing orchestral scores. Touching the keys gave him immediate contact with sound which he considered to be a vital part of the creative process. This tactile element provided him with an opportunity to feel sonorities and harmonies in addition to hearing them, and the subtleties of the instrument offered the possibility of fresh revelations at every repositioning of his fingers. As Stravinsky’s works for orchestra began life at the keyboard in this deft, exploratory way, it is not by chance that several of them translate back into piano music with conspicuous success.

The celebrated Russian ballet scores commissioned by the impresario Sergei Diaghilev from the young Stravinsky are outstanding orchestral works in their own right and constitute one of the highpoints in the era of artistic innovation immediately preceding the First World War. With the exception of The Rite of Spring, these scores contain an important part for the piano. In the case of Petrushka (originally conceived as a concertante piece for piano and orchestra), not only does the instrument bring lustre and coruscation to the orchestral palette; it is also entrusted with an important concertante role. Although the Rite does not feature a piano in its considerable orchestral forces, the often percussive effects of the music work remarkably well on the keyboard, from the stamping chords which initiate the ‘Dances of the Young Girls’ to the almost tangible, steely textures of the concluding ‘Dance of the Earth’.

There is a persuasive argument for regarding the piano-duet arrangements of Stravinsky’s ballet scores as more than poor substitutes for the genuine article. In the first place they have lasting historical value, allowing the listener to experience masterpieces at a seminal, investigative stage of their development. The details and new perspectives that emerge in the piano versions shed new light upon Stravinsky’s musical invention as well as his architectural mastery. They are thought to have originated as working scores while the ballets were in rehearsal: a few weeks before its first public performance, Stravinsky played through the first half of The Rite with Debussy, who was deeply impressed, admitting in a letter dated 5 November 1912 that ‘it still haunts me like a good nightmare’.[1] Moreover, Stravinsky himself held these duet versions – his only ballet transcriptions for one piano/four hands, and the only complete arrangements he ever made of Petrushka and The Rite – in sufficiently high regard to revise them along with the orchestral scores in 1947. 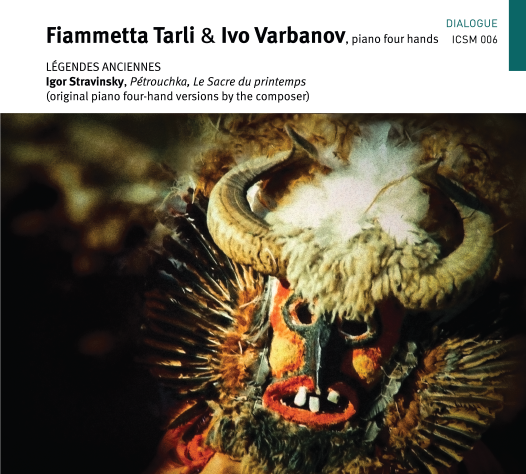