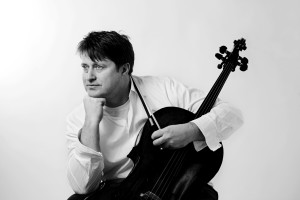 Jozef Lupták is one of the most prominent figures on the Slovak musical scene. He holds the Award of the Minister of Culture for his achievements as a concert cello soloist and as artistic director and founder of the festival Convergence. He was also nominated for the prestigious Cristal Wing Award in Slovakia and won several international competitions, such as the Cello Competition of Slovak Conservatories in 1986, the jury prize at the Murcia Cello Competition in Spain, the BANFF Centre Long Term Residency Scholarship, the May Mukle Cello Prize at the Royal Academy of Music in London, and the Frico Kafenda Award in 2009. He graduated at the University of Performing Arts (VSMU) in his hometown, Bratislava, and subsequently with Robert Cohen at the Royal Academy of Music, London.

Jozef’s London experience and the lack of a chamber music scene in his hometown inspired him to create an international chamber music festival Konvergencie (Convergence). From its first edition in 2000 the festival has received excellent reviews by both professional and general audience. Jozef has introduced many prominent artists to the Slovak audience – The Hilliard Ensemble, Jan Garbarek, Doric String Quartet, Fine Arts Quartet – just to name a few. In 2003 he was appointed artistic director of the 7th International Festival of Contemporary Music Melos-Ethos in Bratislava

Part of Jozef’s search for his own musical expression is shown in his collaborations with contemporary composers (Tenney, Krauze, Godár, Zagar, Irshai, Matej, Ayres, Wolff, Jeffery, Machajdík, etc.), which resulted in world premiere recordings, such as the World Premiere CD of Vladimír Godár’s “Music for Cello”, 2-CD of complete Bach Solo Cello Suites (first Slovak recording) as well as his own project “CELLO”: a recording of five new compositions inspired by Bach’s 1st Suite, including improvisations using cello, his own voice, and a beatbox. His most recent classical release is a live recording of his London Debut concert in St. John’s Smith Square. He is currently planning to produce a CD of his cello and vocal improvisations, as well as a CD series reliving the concerts from the Convergence Festival.