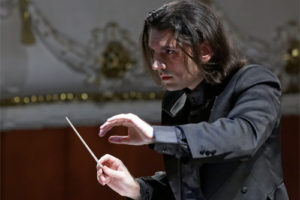 Martin Georgiev‘s works are powerful and possess an individual style. The balance of these qualities allows his talent to unfold in pursuing perpetual themes, such as the meaning of human existence, the responsibility of the Creation to the Creator, and the divine essence of the human being. As a conductor he reaches depths in music, through precisely measured approach to imagery and stylistic features of the works.

The world premiere of Percussion Concerto No. 3 Genesis, commissioned by the Municipality of the City of Varna was conducted by the composer in 2011 with the Symphony Orchestra of the Varna State Opera and soloist Tatiana Koleva, a leading international percussionist who was also born in Varna. The recording with the Bulgarian National Radio SO in Sofia, featured on this CD, was produced 3 years later, in 2014. The recording of Heavenly Reflections was produced in 2007 and was Georgiev’s first recording as a composer and conductor with this orchestra, with whom he had recorded previously as a concert percussionist. The outer parts of the Symphonic Triptych, which are respectively the earliest and the latest composition featuring on this album, were recorded by them in 2016. Martin Georgiev was born in 1983 in Varna, Bulgaria. He showed musical talent already as a 5-year-old, studied recorder, percussion and piano and wrote his first compositions when he was twelve. The first concert featuring only his compositions was given in 2000 at the Varna City Art Gallery and in the same year he won the First Prize and Grand Prix of the International Music Festival “Hopes, Talents, Masters”, Albena (Bulgaria, 2000), and two awards for transcriptions from the Union of Bulgarian Composers.

Before finishing secondary education in 2002 at the National School of Arts ‘Dobri Christov’ in Varna, specialising in percussion with Dalila Nedelcheva, and conducting and composition with Prof. Milko Kolarov, he had participated in many festivals and concert tours to Canada, France and Greece, won 15 prizes from Bulgarian and international competitions, and in the same year performed as a soloist in the premiere of his First Percussion Concerto for vibraphone, marimba and string orchestra at the Varna Summer International Music Festival. His achievements were acknowledged by the State Department for Education, Science and Technology with a National Diploma for outstanding achievements in music in 2002. In 2003, aged 19 he received the Award for Symphonic Composition at the 75th Anniversary of the Sofia National Philharmonic Orchestra with his Passacaglia on Two Bulgarian Themes, (Sofia Philharmonic, Rossen Milanov conductor). The same work was selected by the international panel of the TACTUS Young Composers Forum in Brussels, Belgium, performed by the National Orchestra of Belgium conducted by Pascal Rophé and later received the UBC Golden Stave Award.

His first opera, The Mirror, with original libretto by Marike van Aerde, was premiered in London in 2009 by Azalea, conducted by Jessica Cottis with patrons Sir Charles Mackerras, Lady Valerie Solti and Andrew Ritchie CBE.

From 2008 to 2013 he completed his PhD in Composition at the Royal Academy of Music, University of London, supervised by Dr. Philip Cashian with subsidiary supervision by Sir Peter Maxwell Davis, Julian Anderson and others, supported with scholarships from the Wingate Foundation, Alan & Nesta Ferguson Trust and Sir Richard Stapley Trust. Within that doctoral research he developed “morphing modality”, an innovative compositional technique involving modality, linear harmony and polyphony, enriched by applying principles drawn from Bulgarian and Byzantine Orthodox sacred chant, the visual art technique of Image Morphing, and research in music psychology, perception, cognition, and psychoacoustics.

From 2003 to 2013, while guest conductor of the Bulgarian National Radio Symphony Orchestra, Sofia National Philharmonic Orchestra, Varna Philharmonic Orchestra, the Symphony Orchestra of the Royal Academy of Music, London, associate conductor of the Bloomsbury Opera, London, and principal guest conductor of the contemporary music ensemble Azalea, London, he performed premieres by young British composers as well as UK premieres by Pancho Vladigerov, Dimitar Nenov and Vassil Kazandjiev. In 2010-11 he was Embedded composer in residence with the BBC Symphony Orchestra, London within a programme for outstanding young composers by Sound and Music. In 2012 he was appointed composer in residence to the City of Heidelberg, Germany (Komponist für Heidelberg 2012|13), on the initiative of its GMD Yordan Kamdzhalov. On this occasion he composed The Secret for symphony orchestra, commissioned by the Heidelberg Theatre and Symphony Orchestra and premiered in 2013 conducted by the composer. Since 2013 Georgiev has been Assistant Conductor for the Royal Ballet at the Royal Opera House, Covent Garden, London.

Martin Georgiev is a laureate of the TACTUS prize of the TACTUS Young Composers’ forum in Brussels, Belgium, where his works were selected in 2004, 2008 and 2011, performed and recorded by the Brussels Philharmonic (cond. by Michel Tabachnik) who performed his music also at the Ars Musica International Music Festival (cond. Fabien Gabel). He is recipient of a composition prize in memory of Sir Henry Wood by the Royal Academy of Music and finalist for the Hindemith Prize, Germany. His works have been performed in the UK, Bulgaria, USA, France, Germany, Belgium, The Netherlands, Poland, Japan, Mexico, Canada, Greece, Israel and Italy.