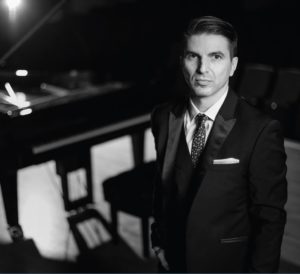 Described as a “pianist with superhuman coordination,” Dr. Milen Kirov is an award-winning Bulgarian-American performer, composer, and educator with an inimitable artistic voice and celebrated creative output. His career redefines the role of the performer-composer in 21st century by transcending genres, labels, and artistic boundaries. Combining his Bulgarian music heritage and concert pianist background with contemporary composition, jazz, world music, and improvisation, Dr. Kirov has carved a thriving career as a unique and respected artist.

Milen Kirov has won awards from the Bulgarian National Radio Composition Competition; Bulgarian National Music Competition “Sv. Obretenov”; MTNA Performance Competition; Reno Chamber Orchestra Concerto Competition; Liberace Scholarship Competition; J. Huntzinger Concerto Competition, and has received numerous grants and commissions from organizations such as the American Music Center and Montecito Music Festival among others. In June of 2015 Dr. Kirov was awarded a Certificate of Congressional Recognition by the United States Congress for his work as a director of an international music ensemble, and for “showcasing Bulgarian culture and continuing Los Angeles’ tradition of multiculturalism.” Milen has performed throughout Europe and North America and has written and recorded music for several films including “Human Error” – a Robert M. Young film, official selection of the 2004 Sundance Film Festival; “A Cigar At the Beach” – an award-winning film by Triskalion Entertainment, and “Woody Allen: A Documentary” directed by Emmy-winning filmmaker Robert Weide, part of the celebrated PBS’ American Masters series.

As an artist and producer, Dr. Kirov has released 4 albums and several singles as a soloist and bandleader, and has appeared as a guest artist on numerous other records on labels such as Sony BMG, MRi, and A.i. Music. Milen’s compositions and performances have been featured on dozens of radio and TV stations on four continents. Some of the diverse artists he has performed and/or recorded with include Perry Farrell, Ellis Hall, Miroslav Tadic, Dragomir Yosifov, Steve Ferrone, Mike Keneally, John Bergamo, Theodosii Spassov, Money Mark, and James Gadson, among others. Dr. Kirov is also known as a keyboardist who utilizes a wide range of acoustic, analog, and digital keyboard instruments such as harpsichord, pipe organ, accordion, Hammond organ, Fender Rhodes piano, and synthesizers.

Born in Plovdiv, Bulgaria in a family of musicians, Milen Kirov started playing the piano at age four and attended High School of Music “D. Petkov” and Academy of Music, Dance, and Fine Arts in his hometown. He holds degrees from California State University, Northridge and California Institute of the Arts. Currently Milen resides in Los Angeles, California where he is an Assistant Professor of Piano, Composition, and Theory at Los Angeles City College. He frequently gives master classes and lectures, and serves as a jury in piano, jazz, and chamber music competitions. Dr. Kirov is the co-founder, and member of the jury of the annual Competition for Young Pianists “Stella Oslekova” held in his hometown of Plovdiv and dedicated to the memory of his beloved first piano teacher.

Milen Kirov is a Yamaha Artist.