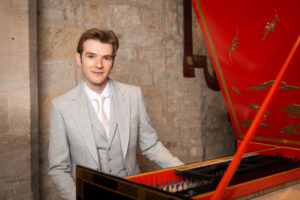 Nathaniel Mander is devoted to authentic harpsichord touch and eighteenth-century aesthetic. Known for his expressive and virtuosic performances, he pursues an international career performing as a harpsichordist and fortepianist. From a young age, Nathaniel was entranced by the unique sound of the harpsichord and was inspired to take up the instrument.

He began his musical education with Richard Lester in Cirencester, where he also gave his first recitals. In 2007 Nathaniel moved to London to study at the Royal Academy of Music with Carole Cerasi. He graduated with first class honours and took first prize at both the Early Keyboard Ensemble Competition at Fenton House and the Broadwood Solo Harpsichord competition. He was appointed Junior Fellow at the Royal College of Music for two consecutive years, following which he spent time in Paris and Rome to take lessons with Elisabeth Joyé, Skip Sempé, Pierre Hantaï and Béatrice Martin.

Nathaniel now pursues a varied career as a performer, recording artist and teacher. This is his debut CD with ICSM records.

‘Even if the word surely wasn’t invented for a Baroque artist: his performance had verve!’