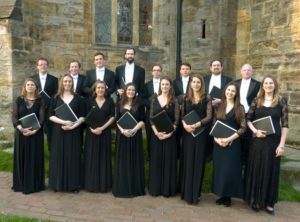 Oxford Camerata is a professional vocal ensemble that performs music from plainchant to the present day. Founded in 1994 by its Music Director and Principal Conductor Jeremy Summerly, the ensemble consists of a core membership of fifteen singers, though personnel size varies according to the demands of the repertoire. While the Camerata is known primarily for performing unaccompanied repertoire, it has also performed accompanied repertoire, employing the services of the Oxford Camerata Instrumental Ensemble (founded in 1992) and the Oxford Camerata Baroque Orchestra (founded in 2007). Oxford Camerata has a revered discography comprising 40 discs, which are mostly available on the Naxos label. The group is especially renowned for its recordings and performances of Renaissance music, but other discs include an especially fine recording of the 1888 version of Fauré’s Requiem and medieval music by Hildegard von Bingen.